VIII Congress of the International Free Thought Association, 2020 in Madrid: “Secular school and secularism in Education” 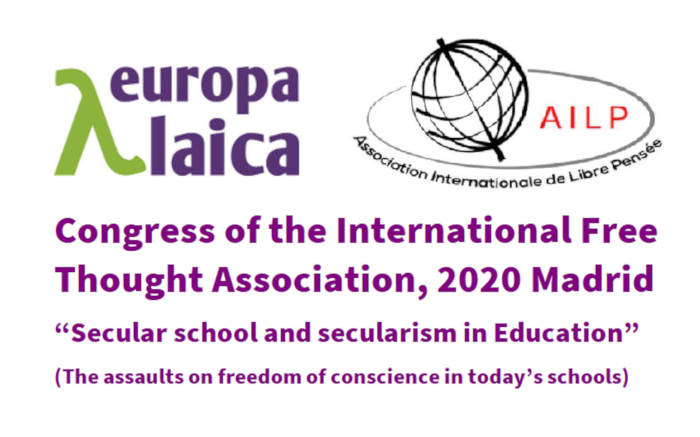 To the secular organizations, free thinkers, humanists, atheists, masonic obediences, trade unions, educational communities, political bodies, and to all the institutions, networks and platforms fighting for the separation of State and religions, and for a true secular education.

On behalf of the association Europa Laica (Spain), also part of the International Free Thought Association (AILP), we have the honour to convene and invite you to take part in the city of Madrid, on September 19 2020, at the eigth Congress of the International Free Thought Association, which –on this occasion- will be developed under the designation: “Secular school and secularism in Education” – (The assaults on freedom of conscience in today’s schools). We will address the main challenges today’s schools have to face, from a free consciousness perspective.

In the history of free thought and secularism, Education as a universal and secular service has been an aspiration to guarantee the emancipation of every individual. There cannot be a secular State without a public universal secular educational service ensuring freedom of conscience and acting as a guarantor against social segregation.

The separation of State and religions carries the principle of integral secularism in educational systems, an essential condition for democracy, which needs to protect School from any dogmatic influence, in order to contribute to the training of a free and enlightened citizenry, with a critical capacity and based on the light of reason. Free thought has an international approach, and the construction of secularism, which varies depending on the historical and geographical context, has an international goal, as it is an essential principle for every DEMOCRACY.

Historically, educational systems in the vast majority of countries have been penetrated by confessionalism and religious dogma, and Church schools have played a fundamental role in deepening social segregation and eliminating individual autonomy. Even today churches continue to have a strong influence in many educational systems, and not only at primary and secondary levels, but also in university education and higher studies.

Nowadays, school has to face many challenges related to its insertion into a changing world, since in some countries School has frozen in time maintaining the nineteenth-century model. If immobility is eroding School, so are the attempts to transform education into a big business instead of a universal service based on the general interest and equal opportunities, at the risk of turning the educational systems into spaces that amplify social segregation and where religious corporations are already taking positions in this new business.

The program and the registration form will be published on February 20.

We inform all the attendants that you will be greeted, in Madrid, with open arms.

Antonio Gómez Movellán. President of Europa Laica, on behalf of the Board