The latest winner of Spain’s Gold Medal of Police Merit never walked a beat or made an arrest. True, she never flinched in the face of danger. But that is because she can’t move.

Reaching far outside its uniformed ranks, the Interior Ministry awarded this year’s medal to a life-size statue, Our Most Holy Mary of Love, “for sharing police values such as dedication, caring, solidarity and sacrifice.”

The choice drew attention to a Spanish tradition—awarding state honors to Roman Catholic icons—and triggered a lawsuit that aims to undo it. Spain’s National Court is expected to rule in the coming weeks.

Jorge García González, head of the Movement Towards a Secular State, is suing the Spanish government to limit what he calls an ingrained Catholic influence in public affairs. He isn’t entirely unhappy with the award, calling it “a blessing in disguise” that has inspired jokes and energized his followers. An online petition has gathered more than 1,500 signatures supporting the nomination of Spider-Man for next year’s medal.

The award-winning icon, called Virgin del Amor in Spanish, depicts the mother of Jesus Christ and resides in a church in Málaga, in southern Spain. She meets none of the qualifications for a recipient of the police medal, Mr. García said: She isn’t a member of the police force, nor has she suffered injury or death in the line of duty. “Even if you believe in the Virgin, a statue is not a person,” he said.

Officials say such awards simply recognize long-standing ties between Spain’s police forces and Catholic lay communities. In this case, the medal indirectly honors the work of the Brotherhood of Jesus El Rico, a group which hoists the icon of Mary along with one depicting Jesus for a solemn procession through the streets of Málaga every Holy Week.

“This has been happening for decades,” said José Manuel Pérez, deputy director general of the national police technical cabinet, who oversees the nominations and displays a poster of Mary in his uniform locker. “For many people in southern Spain, the Virgin and the religious groups dedicated to these icons do important work in the community.”

Some rank-and-file police officers object. José María Benito, an official of the police officers’ union, told the online Spanish daily El Boletín: “Give the Virgin whatever you like, take her some flowers, make her the patron saint of our people, but don’t give her a police medal, least of all one reserved for police officers who have lost their lives in an attack.”

Yet the award has precedents in municipalities across Spain. The Virgin de la Almudena, Madrid’s patroness, has held the city’s Gold Medal, a civil award granted in recognition to institutions or people who have distinguished themselves within the region, since 1945 and was awarded its Medal of Honor in 1961.

The practice has gained momentum since the conservative Popular Party swept municipal and national elections in 2011, said Mr. García, who since then has documented more than 30 decisions by municipal councils to appoint local icons representing Mary, Jesus and various Catholic saints as “perpetual mayors.” One council, in the city of Almería, passed the incumbent mayor’s official baton to an icon of Mary, laying it at her feet.

When the municipal council in Prado del Rey asked voters to ratify the Virgin of Carmen as their “perpetual mayor,” the icon won easily, although just 13% of voters went to the polls.

Two years ago Interior Minister Jorge Fernández Díaz granted a police medal to the Our Lady of the Pillar in Zaragoza, patron saint of Spain’s military police. This year he bestowed praise on another saint, announcing at Spain’s annual International Tourism Fair that St. Teresa was “making important intercessions” for the national economy “during these tough times.”

Mr. García, the 49-year-old owner of a small clothing store in Zaragoza, is uneasy about all this.

Smartly dressed with dark, slicked-back hair, he attends Mass every Sunday and says personal beliefs “belong in the private sphere.” He said he formed his views as a history and philosophy student in his 20s and hid them for years from his devoutly Catholic mother. In 2008 he and like-minded secularists formed their movement, which now claims 100 dues-paying members and several court victories.

Mr. García said he avoided making a legal church-state issue out of Our Most Holy Mary of Love because Spain’s 1978 constitution is ambiguous on the subject of religion. It states, “There shall be no State religion,” but adds that “the religious beliefs of Spanish society shall be taken into account.” According to a 2014 study by the Spanish Center for Sociological Research, 69% of Spaniards identify themselves as Roman Catholics.

In challenging the police award, he built his case on Spain’s 1964 Law of Honors and Awards, which specifies that the police medal must “reward extraordinary services performed by administrative police officers.”

Spain’s Interior Ministry, asked to comment on the case, didn’t address that argument. It said in an email that the award of such decorations to recipients outside the police ranks “does not constitute an extraordinary fact in the history of the state security and police forces.”

In court documents, government lawyers argued that Mr. García’s organization, by law, had no business suing because its interests hadn’t been harmed by the award.

Many residents of Málaga don’t get what all the fuss is about. Most shops and public offices here in southern Spain’s Andalusia region shut down during Holy Week as crowds join in Catholic processions depicting the crucifixion and resurrection of Christ.

There was no popular outcry in Málaga when Spain’s national police chief pinned the medal to the statue’s jewel-bedecked, red-and-gold robes in April. “It’s totally inoffensive,” said tavern owner Alvaro Fernandez Chamez. “People here are handing out medals all the time.”

Mr. García’s challenge to the award rests with the high court, which has decided that a panel of magistrates will examine the case without having the opposing parties call witnesses.

“I think this is a smart move,” Mr. García said, suggesting that his lawyer would have asked that the award recipient take the stand. “After all, what would the Virgin say? A statue can’t speak.” 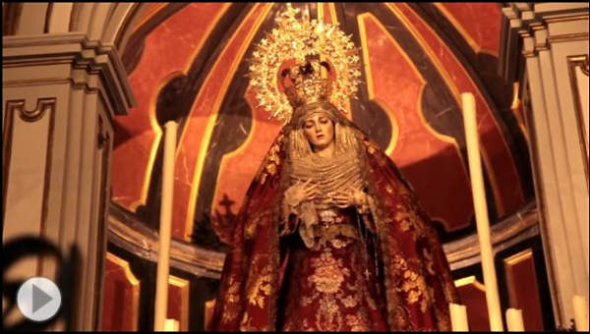 The statue of the Virgin Mary in Malaga, Spain, was given the country's highest police honor: the Gold Medal of Police Merit. But not everyone is celebrating. 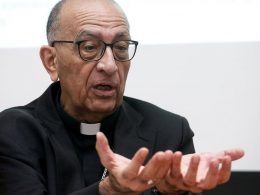 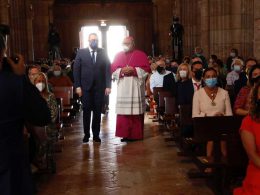