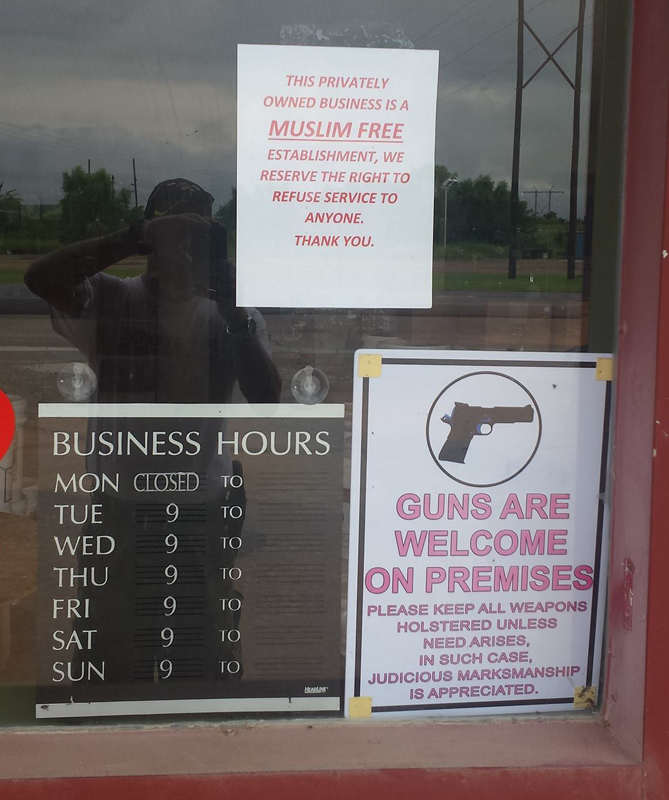 A gun range in Oktaha, a small town near Muskogee, has joined a growing list of U.S. businesses that advertise themselves as “Muslim-free.”

Gun range manager Chad Neal, a medically discharged veteran who was deployed to Iraq in 2003, said last month’s shooting at the military recruiting station in Chattanooga, Tenn., prompted him to hang the sign in the door of the business, called Save Yourself Survival and Tactical Gear.

“I didn’t want any terrorists, or Muslims, cult, whatever you want to call them, training on my gun range,” Neal said. “There is a military recruiting station in the mall in Muskogee, and I thought this was one thing I could do to help protect our local soldiers.”

The Council on American-Islamic Relations tracks businesses that ban Muslims, and it called for the U.S. Department of Justice to investigate.

“It is clear to us that the establishment of Muslim-free zones is a violation of the law,” said Nihad Awad, executive director of CAIR. “There are clear laws that prohibit discrimination based on religion. This kind of thing is in violation of the U.S. Constitution and the American spirit of respect for the rule of law.”

Awad called the equating of Muslims with terrorists “beyond ignorant.” He said that there are individuals in many faiths who commit terrorist acts.

Neal and his fiancee, Nicole Mayhorn, opened the store in December; Mayhorn is the owner. He described the pair as “Christian Constitutionalists who love the country.”

The sign says, “This privately owned business is a Muslim free establishment, we reserve the right to refuse service to anyone. Thank you.”

Awad called the Muslim-free zones a return to segregationist practices of the past.

“Segregation was shameful then, and it’s shameful now,” he said.

But Neal said the rule had nothing to do with segregation or race.

“I know the Quran says about lying to infidels and killing infidels. I don’t want them practicing those religious beliefs on my range.”

This website uses cookies to improve your experience while you navigate through the website. Out of these, the cookies that are categorized as necessary are stored on your browser as they are essential for the working of basic functionalities of the website. We also use third-party cookies that help us analyze and understand how you use this website. These cookies will be stored in your browser only with your consent. You also have the option to opt-out of these cookies. But opting out of some of these cookies may affect your browsing experience.
Necesarias Siempre activado

Any cookies that may not be particularly necessary for the website to function and is used specifically to collect user personal data via analytics, ads, other embedded contents are termed as non-necessary cookies. It is mandatory to procure user consent prior to running these cookies on your website.