Dialogue with churches, religious associations and communities and philosophical and non-confessional organisations 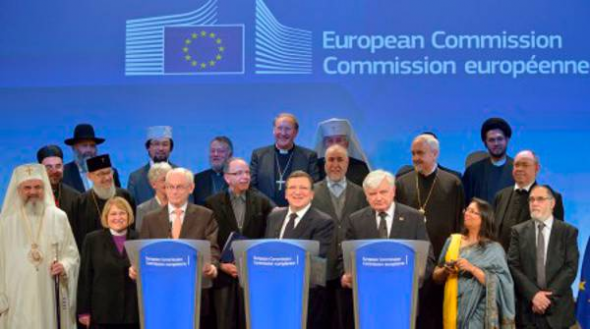 Established in the beginning of the 1990s by EU Commission President Jacques Delors the dialogue with churches and communities of convictions offers an opportunity to engage in the European integration process. It allows for an open exchange of views on pertinent EU policies between EU institutions and important parts of European society. The Lisbon Treaty (Article 17 TFEU) has lifted the dialogue from good practice to a legal obligation, enshrined in primary law.

The responsible Adviser for the dialogue between European institutions and churches, religious associations or communities as well as philosophical and non-confessional organisations is Ms Katharina von Schnurbein

Legal basis for the dialogue

The Treaty of Lisbon explicitly introduces the idea of a dialogue between European institutions and churches, religious associations and communities as well as philosophical and non-confessional organisations (Article 17 TFEU).

1. "The Union respects and does not prejudice the status under national law of churches and religious associations or communities in the Member States.

2. The Union equally respects the status under national law of philosophical and non-confessional organisations.

3. Recognising their identity and their specific contribution, the Union shall maintain an open, transparent and regular dialogue with these churches and organisations."

An open, transparent and regular dialogue

Article 17 (3) TFEU provides for an open, transparent and regular dialogue with churches, religious communities as well as philosophical and non-confessional organisations.

a. "open": all relevant topics of the EU agenda can be addressed in this dialogue that is of horizontal nature and commonly agreed. Dialogue partners can be churches, religious communities and philosophical and non-confessional organisations that are recognized as such at national level and adhere to European values.

b."transparent": the EU institutions commit themselves to convey to the public all relevant information about this dialogue; one concrete sign of this is the fact that a press conference is held after high level meetings with the Presidents. Beyond the high-level meetings this website offers detailed information about other activities of the dialogue.

c."regular": The European Commission maintains an ongoing dialogue with its partners at various levels, in the form of bilateral meetings or specific events. It has become good practice to organise once a year two separate informal meetings hosted by the President of the Commission and co-chaired by the Presidents of the European Parliament and of the European Council, with high level representatives of religious communities and associations as well as representatives of philosophical and non-confessional organisations, usually on the same topic.

The fall of the Berlin Wall in 1989 marked a turning point in European history. The then EU Commission President Jacques Delors (in office 1985-1994), was well aware of the challenges ahead. These included the prospect of EU enlargement and the construction of a political union that would match the ambitions of the economic and later monetary union.

The starting point was talking to representatives of organisations active in the fields of science, culture and religion. The aim was to exchange ideas about the meaning and implications of the European integration process. Consequently, the EU Commission introduced a regular dialogue with religions, churches and communities of conviction. Delors' successors, Jacques Santer, Romano Prodi, as well as the current President, José Manuel Barroso, have kept the tradition and developed it further, regarding it as an important instrument of participatory democracy.

Disclaimer: The views expressed in the enclosed documents do not necessarily reflect those of the European Commission 30/05/2013 – High-level Religious Leaders Meeting on "Putting citizens at the heart of the European project in times of change", Brussels

22/05/2013 – Message of President Barroso at the occasion of the presentation of the "2013 Lord Jakobovits Prize for European Jewry" to H.E. Angela Merkel, Chancellor of Germany

13/03/2013 – Joint message of congratulations by President Barroso and President Van Rompuy, to the newly elected Pope and Head of the Vatican State, his Holiness Francis 27/11/2012 – High-level meeting with representatives of philosophical and non-nonfessional organisations on "Intergenerational Solidarity: Setting the Parameters for Tomorrow's Society in Europe", Brussels

17/10/2012 – Dialogue Seminar "Promoting Solidarity in the current Economic Crisis: The contribution of the Orthodox Church to European Social Policy", Brussels

26/09/2012 – Dialogue Seminar "Towards an Intergenerational Solidarity in Europe", Brussels

23/04/2012 – Dialogue Seminar "A partnership for democracy and shared prosperity: a common desire to promote democratic rights and freedoms in the countries of the southern Mediterranean ", Brussels

Organized by BEPA and the European Association of Free Thought (EAFT)

30/11/2011 – Meeting with Philosophical and Non-Confessional Organisations

15/10/2010 – Meeting with philosophical and non-confessional organisations

"It was a unique occasion when the three European presidents could listen to such eminent representatives of different organisations."

Dialogue Seminar with Eurodiaconia on “More in Need and More Needed: Diaconia and social inclusion in times of crisis”

President Barroso addresses the "International Meeting for Peace, Faiths and Cultures" of the Community of Sant'Egidio in Krakow, Poland

Dialogue Seminar with the Conference of European Churches (CEC) and the Commission of Bishops’ Conferences of the European Communities (COMECE) on “Towards an ethical debate – climate change as a challenge for lifestyles, solidarity and global justice”

Debriefing on the Commission's Legislative Work Programme for 2009